— the new weapon against the coronavirus 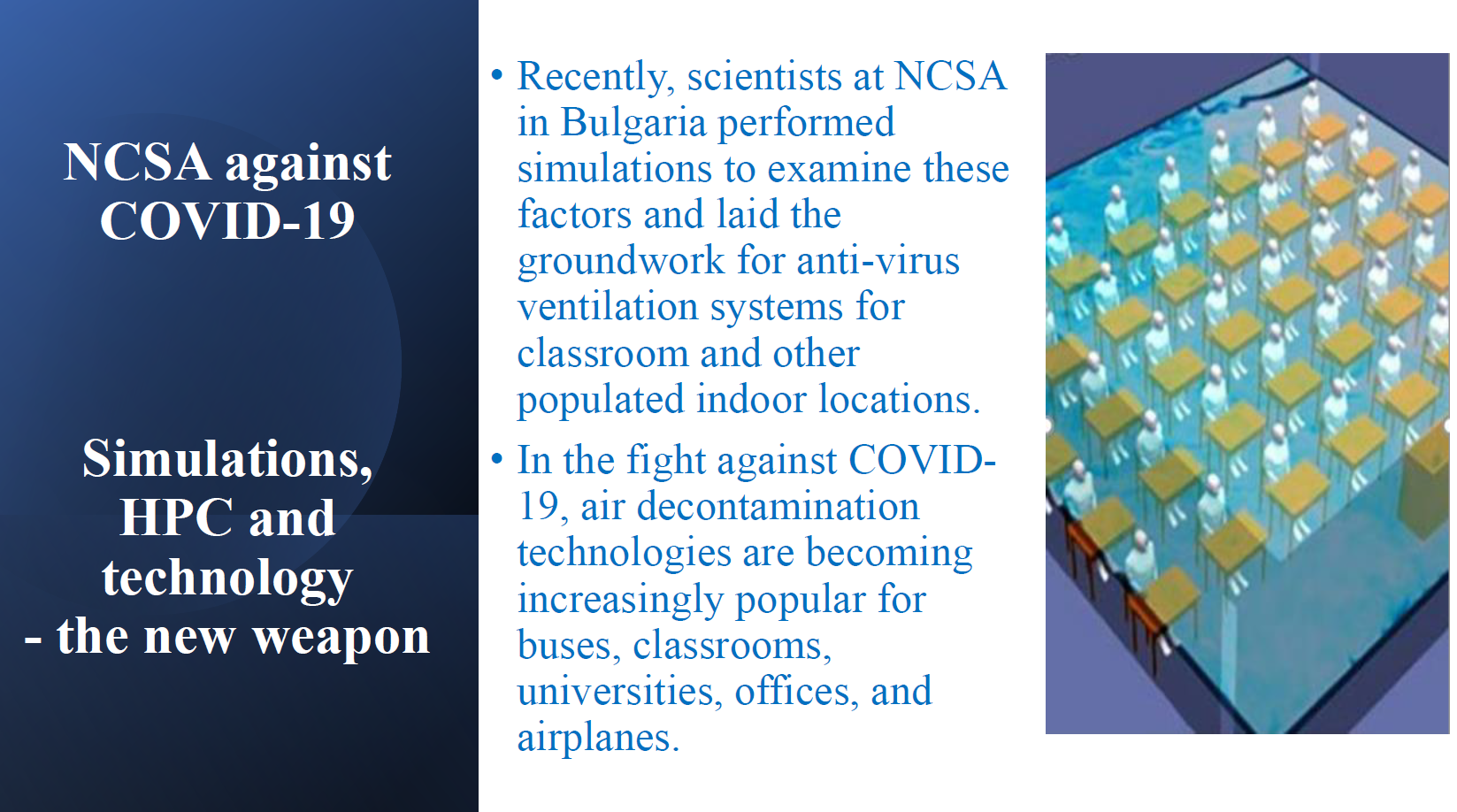 Here you can see our presentation - NCSA against

Here you can see the HPCwire.com publication about NCSA technology

Along with vaccines and drugs, humanity is developing another powerful weapon against the coronavirus.: ventilation techniques to clean the air of indoor spaces from the SARS-CoV-2 virus. However, to construct and install fitting devices, researchers must first learn in detail, how viable the virus is and how air cleaning systems can get rid of it in a suitable time — before infection occurs. Recently, scientists at NCSA in Bulgaria performed simulations to examine these factors and laid the groundwork for anti-virus ventilation systems for classrooms and other populated indoor locations.

In the fight against COVID-19, air decontamination technologies are becoming increasingly popular for buses, classrooms, universities, offices, and airplanes. The method is simple and effective: It can physically destroy the SARS-CoV-2 virus, and reduce the risk of infection. At the current stage of the pandemic, these technologies are needed, since it is yet unclear if the available vaccines reduce the transmission of the virus, and how effective they are against all emerging strains. The results from Israel — the country with the most widespread vaccination worldwide — are contradictory.

That is why investment in different technologies is an essential part of the fight against the virus. Moreover, research predicts that humanity may soon face a new pandemic due to the constant disruption of nature’s biodiversity, and the exchange of pathogens between animals, humans and the environment.

A group of Japanese scientists and organisations including the Japanese Ministry of Education, Science and Technology, the RIKEN Center for Computational Science and several leading universities had previously conducted numerous simulations of the virus’s behaviour both indoors and in the environment. This large group of invested scientists and organisations includes the multidisciplinary team of Dr Makoto Tsubokura, head of the Complex Phenomena Unified Simulation Research Team at RIKEN, the Kyoto Institute of Technology, supported by Kobe University, Kajima Corporation, and RIKEN Center for Computational Science. The simulations were performed on Fugaku, the world’s fastest supercomputer.

The aim was to determine how long droplets and aerosols loaded with virus propagate when someone is talking, coughing or sneezing. [Droplets, smaller than several micrometers will become airborne as aerosols, and float in the air for a long time]. The study tracked how such droplets and aerosols spread outdoors as well as indoors, such as on public transport, on planes, in offices or in classrooms. Of course, the simulations included different conditions like whether there were open doors, windows, air conditioners, etc. Furthermore, the simulations examined which types of face masks and shields do help, and to what extent. 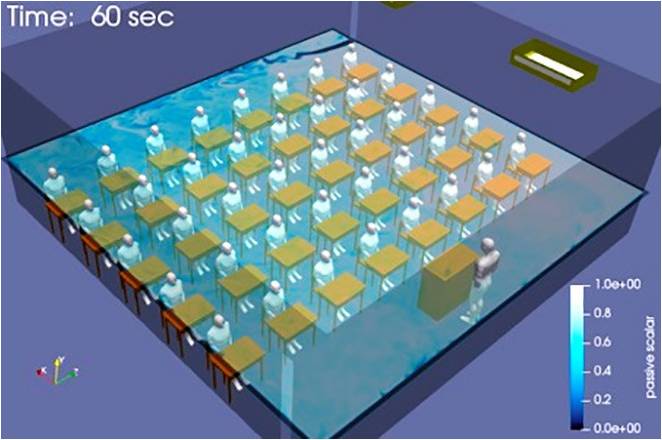 A simulation in a classroom by the supercomputer Fugaku, in which a window in the back of the room and a door in the front of the room are left open (Kyoto Institute of Technology, supported by Kobe University, Kajima Corp. and Riken Center for Computational Science)

These results were then compared with experimental data to verify that the simulations correctly reflect reality. One of the project’s conclusions was that unventilated places with dry air are among the most dangerous environments for infection. This is mostly the case in classrooms, university halls, offices, crowded shops, hospitals, bus and train stations or airports.

How to get fresh and virus-free air

Some of these valuable results were then used by researchers at NCSA in Bulgaria for further investigation. NCSA’s calculations are based on Fugaku’s simulations in a classroom and examined more specific conditions in indoor areas. The calculations found that a window at the back of the room and a door at the front of the room diagonally opposite to it, both ajar leaving an opening of 20 cm, would provide completely fresh air for 500 seconds. However, this time is too long. That is why the scientists in Japan conducted two more simulations with the goal to shorten the air cleaning time to 100 seconds. In the first one, all the windows in the room and the door to the corridor were open to a gap of 20 cm. The second simulation was almost the same, except that there were two doors at the front and the back of the room, both ajar with a gap of 40 cm.

If there is no second door, the team believes that a classroom can be adequately ventilated by opening windows diagonally opposite each other. However, in many world regions, including Bulgaria and other EU countries, such an approach is not applicable, especially with the cold temperatures in winter.

Therefore, NCSA performed its own calculations to verify the air’s sterilisation and the infection risk using a closed-loop ventilation system. For this purpose, the NCSA took advantage of results published by Dr Martin Kriegel’s team, head of the Hermann Rietschel Institute of the Technical University of Berlin. According to the study, reaching critical levels of viral aerosols depends on the room’s size, the number of people in it and access to fresh air.

German scientists have found that the key is ventilation systems that exchange the room’s air. Their calculations show that if the room is of a size of about 20 square meters, with a height of 3 meters, ventilation that replaces the air twice every hour can provide a safe environment for 80 minutes. However, this is only valid if there are only two people in the room. In a similar environment, but with a hall size of 100 square meters, ten people may not be infected for a duration of three hours. In other words, a classroom with 25 to 30 children will be full of infectious aerosols in just two minutes. Therefore, we must take care to decontaminate indoor air as soon as possible.

A new system uses light to clean the air

The question that researchers at Bulgarian supercomputer centre NCSA now addressed was: How can we achieve this? Again, the scientists could build on previous findings from research conducted at the Irving Medical Center at Columbia University in New York.

Their study tracked how UV-C light affects an aerosol cloud loaded with viruses. Once irradiated, the aerosol cloud passed through a culture of living human lung cells. The experiment’s purpose was to determine what specific characteristics bactericidal lamps must possess to destroy viral particles.

Based on these experimentally obtained results, NCSA created its own project with the aim to probe different decontamination installations — naturally considering variables like the viral load, the number of people, the room’s volume, the required light intensity, the air volume that must pass through the room, or the clean air distribution in the room or hall.

All these complex calculations were performed in NCSA with the goal to achieve 99.9% sterilisation of the entire air volume in a room within 25 min. As a rule, the NCSA technology will be launched one hour before the students enter the classrooms. Then, even if one person sneezes, the room cannot be filled with aerosols within 10 minutes because the system is constantly sucking out the air. The goal is to reduce the concentration to 1 000 viral aerosols per cubic meter. According to medical standards, infection is not possible in such an environment. 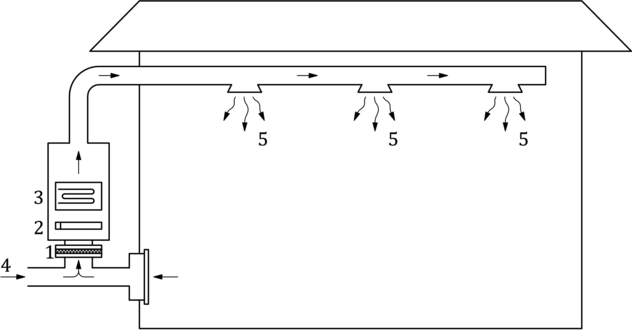 This is the system with the NCSA calculations for complete air decontamination. The diagram shows an ultraviolet germicidal irradiation devices which will be mounted in-duct in heating, ventilating and air-conditioning systems with the following parts: 1) Filter; 2) UV lamp; 3) Heating or cooling coil; 4) Fresh air; 5) Conditioned air as shown on the diagram NCSA Calculations At 99.9% bactericidal efficiency, the dose for inactivation of coronavirus – Hv corresponds to that for Staphylococcus aureus. If the module’s efficiency is set to 99.9%, then Hv = 385 joules/per cubic meter. The calculations are made for a classroom with 30 students; According to the norm, must provide 2 square meters for each student; At a height of room of 3 meters, the air volume is V = 180 cubic meters.

Based on the calculations, the Bulgarian NCSA team designed a ventilation module to minimise air turbulence — something like an air shower combined with closed air recirculation. The scientists propose to use such closed-type ventilation systems with built-in modules containing UV-C lamps to provide controlled and manageable sterilisation as well as air exchange and freshening.

By virtue of experimentally obtained UV-C doses to achieve a level of bactericidal efficiency of 99.9%, NCSA calculated that for classrooms with a volume of 120-150 cubic meters, it is necessary to use a closed block with four lamps of 30 watts each. The fans cannot be more powerful than 100 litres per second because the noise will exceed 30 decibels.

One hundred litres of polluted air will pass through the module per second. Before the module, however, the system throws out part of the dirty air into the environment. Thus, the decontaminated air in the module is mixed with the same volume of fresh outside air. This combination of power and simultaneous air refresh provides a sharp reduction in the risk of contamination.

The implementation will be conducted with specialised Bulgarian organisations in the field of architecture and ventilation systems. The necessary UV-C modules are manufactured in Bulgaria, and they are also exported to European countries. Moreover, NCSA also works with two companies that produce three types of modules for UV-C lamps.

But what is the evidence that this system effectively destroys viruses? Both tests and biological results show that the air decontamination efficiency of the system amounts to 99.9%. They are based on:

ISO 15714:2019(E). Table C.1 describes UV-C susceptibility constants for a range of microorganisms measured in air, together with the dose required to inactivate the micro-organisms. The part about viruses describes the experimental data and the required UV-C dose for inactivation of coronaviruses per square meter.

Analogical data are published by the State sanitary and epidemiological regulation of the Russian Federation. They describe the experimental values of UV-C doses at different bactericidal efficiency levels for 70 types of micro-organisms.

Analogical data are published by the Laboratory of Disinfection, Sterilisation and Bioindicators, at the National Center of Infectious and Parasitic Disease, part of the Bulgarian Ministry of Health.

These are three official sources that confirm what the UV-C dose should be to inactivate the coronavirus. It means that the UV-C dose in the closed module ensures that it will decontaminate the air passing through it.

Based on this, NCSA calculates the necessary equipment to achieve the inactivation of the virus.

The team of Prof. Stoyan Markov, part of NCSA, made all these calculations. They are based on the published results modelled on Fugaku, the Technical University of Berlin, and the Irving Medical Center.

This complex task’s solution, the newly developed ventilation systems with forced air recycling, will be designed separately for each room in schools and universities. NCSA will launch the project together with the Ministry of Education and Science and the Municipality of Sofia.

It will be a part of Sofia’s and other Bulgarian cities’ initiatives to ensure a safe environment for children everywhere and at all times — from the learning process to nutrition and transport. 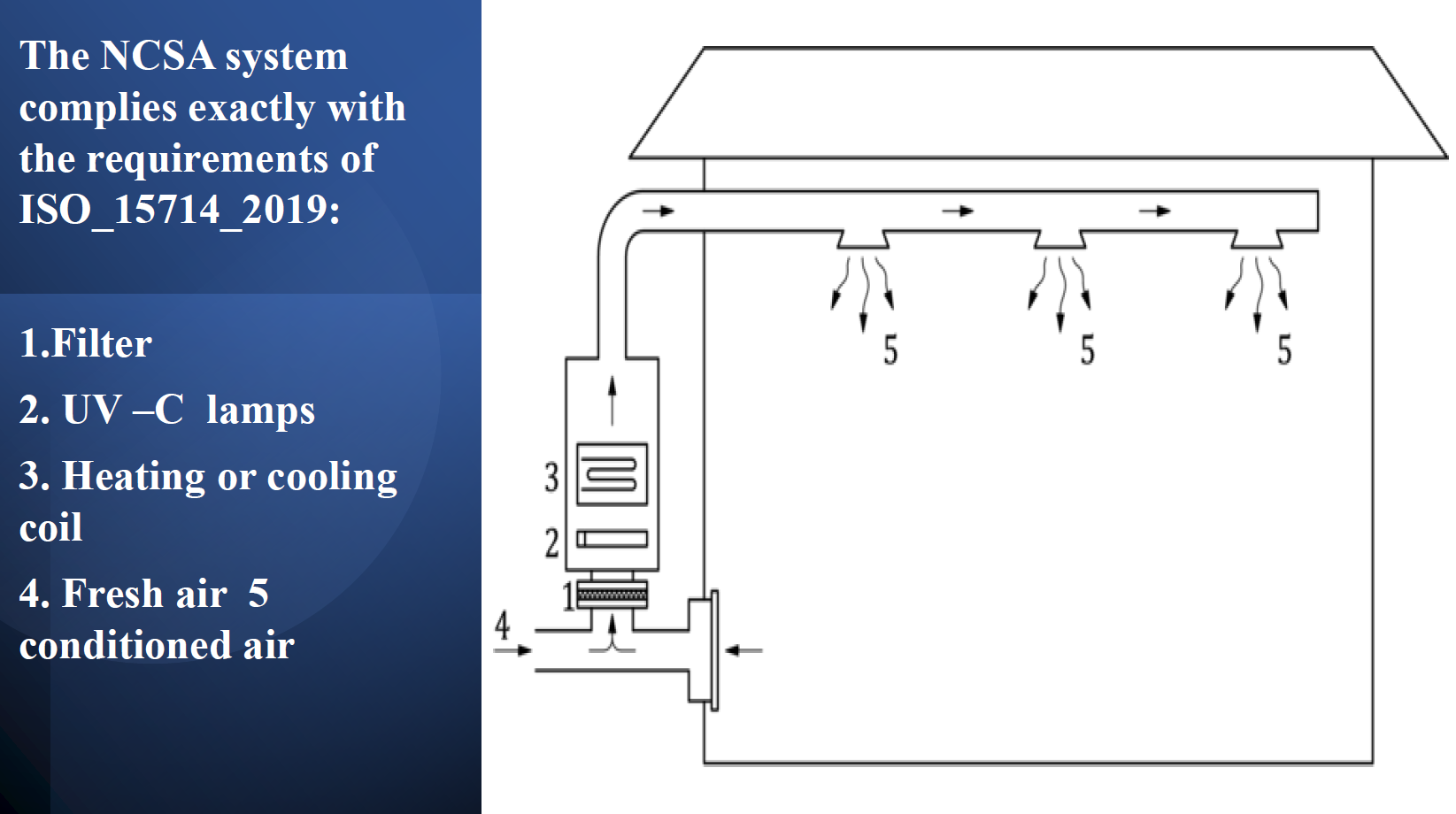